It’s very common, especially when you’re learning tarot, to see certain cards as ‘good’, meaning only happy things for the querent, and others as inherently ‘bad’, so that the sight of them is enough to totally freak you out. 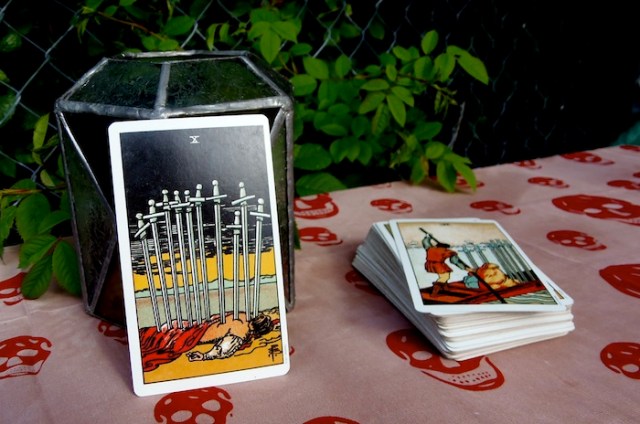 Life’s a bitch and then you die: the Ten of Swords from the Rider-Waite-Smith Tarot

I was doing tarot readings at an event a few weeks ago, and, as always happens, someone came up to me saying ‘I hope you’ve taken all the bad ones out!’  I asked him which cards he meant, and of course he said Death, The Tower, and the Ten of Swords.

I don’t buy this good cards/bad cards idea — it’s not compatible with my belief that there is a tarot card or combination of cards for every human experience. Life is not black and white, with only good experiences and bad experiences; things are obviously so much more complex that that! So too are tarot cards.

The most obvious ‘bad’ card is Death – and the card itself does little to dispel its bad reputation, usually depicting the grim reaper or some other skeletal mosterous thing. But as you probably already know, this card doesn’t actually mean ‘you’re going to die.’ It’s more about the death of the ego, the passing away of a part of yourself which you no longer need. Death enables you to say goodbye to outdated ways and allow yourself to be transformed into something new. Which is clearly awesome!

The cards below show some alternative takes on Death. In the Wildwood Tarot, this card is replaced by ‘The Journey’, whereas in the Shadowscapes, Death is a phoenix. In the Mary-el Tarot, the image is a wise old woman who I feel has been through many, many lives, deaths and rebirths: 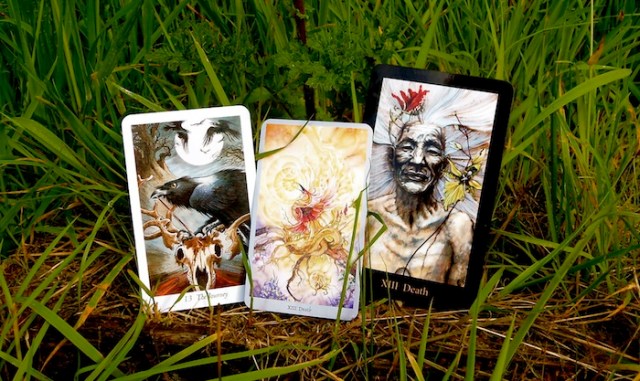 Then there is The Tower. Tarot readers often refer to traumatic life events as ‘tower moments,’ and I’m certainly no stranger to these. The Tower represents a lightening-bolt moment when everything you thought was certain crumbles around you, leaving only rubble and dust behind. A tower moment could be a break-up, a job loss, any unexpected disaster. It can be terrifying, destabilising, completely unnerving… but in the passage of time, usually ends up liberating you in some way. The Tower represents the current status quo — it’s crumbling often indicates that it’s high time for a change, and if you’re not going to do something about it… something else will. So there you are, dazed and confused, standing in the rubble. As your head begins to clear, you realise you have a chance to rebuild things differently — to do things your way.

Another dismal sight is the Ten of Swords, but honestly? It just cracks me up. Here is a person with TEN SWORDS in their back (seriously, how many does it take?) lying on the ground in a pool of blood. Talk about melodrama — this is so OTT it’s laughable. More and more as this card appears in my own readings, I come to see it as a sharp and humorous message. ‘Yes, Beth. Things are tricky right now. But for Christ’s sake get a freakin’ grip!’ And then I know it’s time to stop feeling like such a damn victim and drag myself up by the bootstraps. Lying their moaning won’t change anything, but look, there’s a sunrise on the horizon! In this way, the Ten of Swords is like a springboard; a much-needed kick up the bum to get off the sofa and do something.

The Five and the Eight of Cups are both sorrowful-looking cards, and both do suggest heartache. But again, they can bring a positive or welcome message. The Five of Cups acknowledges pain and says ‘it’s okay to feel this way’. I know I’ve been grateful for that gentle message at times, reassuring me that I don’t have to bounce right back from every emotional challenge. The Five of Cups allows you time to be with your sadness for a while, to truly experience and process what you’re going through.

Meanwhile, the Eight of Cups gives you permission to walk away from a challenging time. In a period of heartache and self-doubt it can be hard to make that final decision, but this card gently suggests that it might be wise to call it quits and gently walk away. 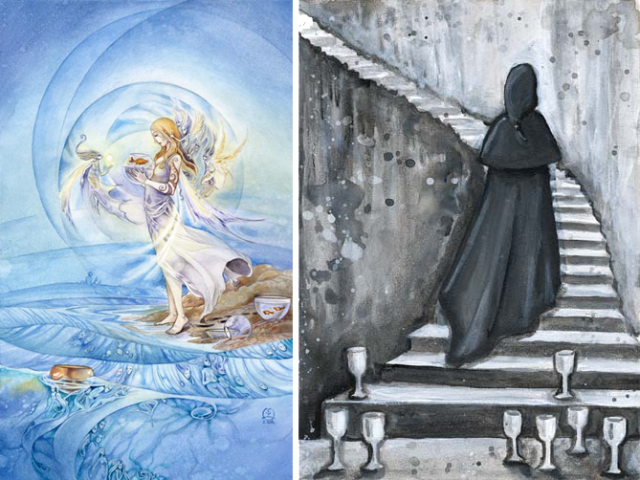 It works the other way too of course. Seemingly ‘positive’ cards can bring warnings or even a telling off, for example I often feel the Ten of Pentacles is reminding me not to miss the magic in life as I focus on building my business and home, whilst the Three of Cups once showed me how I was being suffocated within a close group of friends I had thought were supporting me. This isn’t about putting a positive spin on every card, it’s about understanding that things are never as simple as black and white, good and bad.

It’s so tempting to glance at the cards in a reading, not like the message you see, and hastily shuffle the cards back into the deck to try again. We all have our favourite cards… and those we prefer not to see in our readings, but the more I use tarot in my personal life, the more I learn to respect the message they bring me, to lean in and listen a little closer, rather than dismissing cards I think are irrelevant, ‘wrong,’ or just not what I was expecting.

A couple of weeks ago I went on holiday to Spain. Emma and I drew cards the night before — mine was the Three of Swords. I was gutted. Heartbreak? On holiday? Dammit, that was not what I wanted. Then each day in Spain during my daily draw, the seeming ‘negativity’ continued. Poor health, mental overwhelm, bah, it was heavy stuff… and I really felt it! Eventually I did a full reading to find out what was going on. It turned out the holiday wasn’t so much about sun, sea and sex as I’d hoped, but about allowing myself space to undergo a fairly profound series of realisations that I’d been resisting for a long time. Once I understood what the cards were trying to tell me and allowed the process to take place, things took a turn for the better.

What about you? Have you ever been taken aback by the ‘negative’ message of an old friend, shocked by how such a friendly card could be so cruel? Or have you gradually come to realise that something sad or scary is actually strengthening you or setting you free? Which are your ‘favourite’ cards, and which ones make you want to shuffle again?

Tarot – On the Cardsaugust 8 leo

Tarot – On the Cardsinteresting facts about scorpio

Tarot – On the Cardscancer horoscope august 2017

Tarot – On the cardsmarch horoscope aries