Jeffrey Weiss, photographed at his home in Dallas on Tuesday, December 27, 2016. In the background is his father’s typewriter. (Louis DeLuca/The Dallas Morning News) October 25, 2017 By Yonat Shimron ShareTweetShare

(RNS) — Jeffrey Weiss, a highly respected reporter and RNS columnist who chronicled his spiritual journey with brain cancer, has died. He was 62.

Weiss died in his home in Dallas on Wednesday (Oct. 25).

He was diagnosed in December 2016 with glioblastoma, an extremely aggressive form of brain cancer, and devoted much of the time he had left to his RNS column, My Way to the Egress.

READ: My Way to the Egress

He was a tenacious journalist, writing for the past 29 years at The Dallas Morning News, where he took on a variety of beats, including religion, education and the energy sector.

He was also an avowed geek, curious about everything and willing to tackle complicated issues and write about them with precision, wit and humor.

His trademark stories often examined the intersection of religious doctrine and popular culture, grappling with religious themes in superhero movies, spirituality in the Harry Potter book series and why the Westboro Baptist Church, known for attacks on gays, “inspired others to do good in response.”

“He was one of the best reporters I ever knew,” said Bruce Tomaso, who edited the religion section at the Morning News from 2003 to 2007. “There was no subject under the sun that he couldn’t write about, write lucidly, and get a lot of satisfaction writing about it.”

Weiss, who described himself as an agnostic Jew, was proud of the friendships he struck during his long and storied journalism career. His 1,400 Facebook friends included Jews, Muslims and Christians of all political and cultural persuasions.

Just last week, the Dallas Peace and Justice Center recognized his accomplishments by announcing that he had won the 2017 Media Accountability Award.

In September, he was awarded the Lifetime Achievement Award by the Religion News Association. His last column for RNS was published Sept. 8.

Tyra Damm, a former editor at the Morning News, who worked with Weiss on the religion section, said she appreciated his respect for other faiths.

“He said, ‘Everything looks weird to an outsider,’” Damm said. “He would talk about accepting prayers wherever he went because he interviewed people from so many faith traditions. He was very tolerant and accepting and nonjudgmental. He really helped model for religion journalists how to behave, and journalists in general, about how to treat the growing diversity in our region.”

Weiss loved journalism. His wife, Marni, used to joke that he was married to journalism; she was just the mistress. 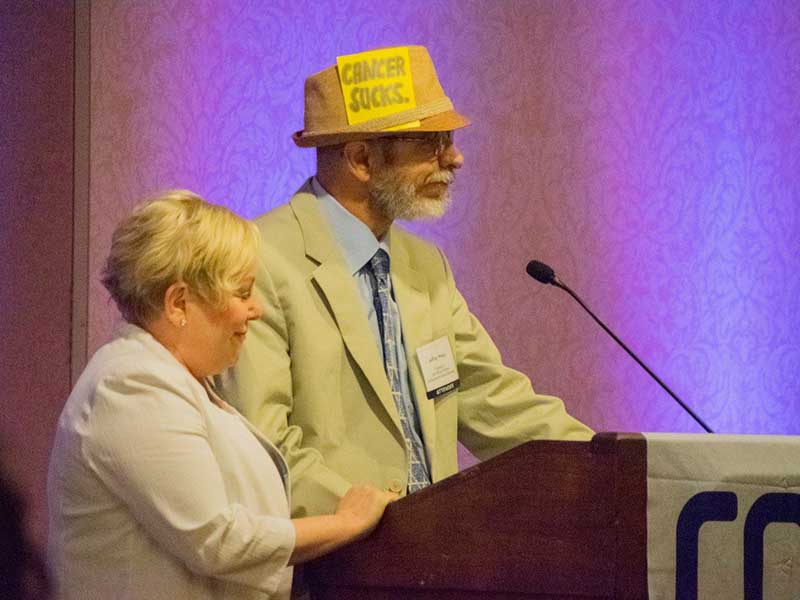 Jeffrey Weiss with his wife, Marni, at the Religion News Association annual conference on Sept. 9, 2017. RNS photo by Joe Schiska

A native of South Florida, Weiss attended Johns Hopkins University in Baltimore and later transferred to the University of Miami, where he majored in journalism and philosophy. He started his career at the Miami Herald, where he worked for a decade covering the police beat and late-night shifts. He moved to The Dallas Morning News in 1988.

Never doctrinaire, Weiss doled out words of wisdom gingerly: “Damifino what the best advice should be,” he wrote. “But I can hope some of my suggestions may make some of the world a little bit better even when I’m gone.”

But in subtle ways his personal wisdom, gleaned from a wide range of sources — Jewish sages, Walker Percy, the Tao Te Ching, among others — shone through.

Weiss was no stranger to cancer. He had previous bouts with different forms of the disease and suffered from diabetes, too. The brain cancer diagnosis came as something less than a shock. He had been struggling to find words and thought he was getting old or needed a vacation, when one day he saw a tiny spot blocking his vision in his right eye. A trip to the ER revealed a tumor and surgery removed an egg-sized blob.

Always a good planner, he and Marni made some quick decisions. He would not hold out for every possible treatment — “Not all potential life is equally valuable to me,” he wrote. And he would donate his body to science.

“My decision is a bit in keeping with Jewish traditional teachings about what to do with bodies,” he wrote. “And some not in such keeping. Which, given my basic attitude as a Jewish agnostic, probably is consistent.”

In addition to chronicling his treatments and his ongoing thoughts about death for RNS, he also started a new vocation: mentoring. Once a week he visited the Morning News office to offer advice to young interns and beginning reporters. He called it “Thursdays with Jeffrey,” a takeoff on “Tuesdays With Morrie,” the best-selling account of a professor dying of ALS.

Those who worked beside him, such as Linda K. Wertheimer, who sat next to Weiss for several years at The Dallas Morning News, said he was always a mentor and not just late in life. His advice: Be bold.

“If you were lucky enough to sit by him or be a friend of his, you just learned so much from the deep conversations you would have,” she said.

Weiss deeply believed that his chosen career offered the possibility of providing not only useful information, but a way of making sense of the world.

As his cancer progressed, he felt more free to offer “meta” advice, not just fixes to stories. He urged interns not to fear failure in school and to take risks earlier rather than later.

And then, in another column, he summed up his moral philosophy this way: “What’s a morally good thing to do? Try to do it.”

libra horoscope 2018 todayJeffrey Weiss’ final story was his own