The glue that kept Sutherland Springs together before and after the shootingsvirgo september 2021Within 24 hours of the mass shooting, another church in town sprang into action, as the coordinating center for the emergency response. 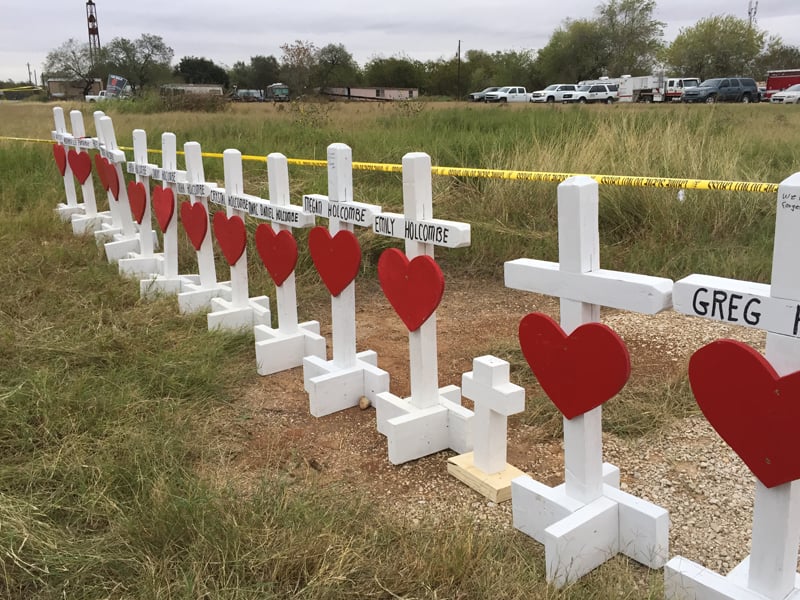 A row of crosses with the names of those killed on the corner of First Baptist Church beside U.S. Highway 87. RNS photo by Yonat Shimron November 10, 2017 By Yonat Shimron ShareTweetShare

SUTHERLAND SPRINGS, Texas (RNS) — After the mass shooting at First Baptist Church, a command center was needed to help investigators, disaster relief teams and families of the dead.

So the town turned to the only other civic institution here capable of handling it all — another Baptist church.

In Sutherland Springs, a crossroads hamlet with one flashing red light, two gas station/convenience stores and a Dollar General store, churches are the bedrock of the community. That’s where life is lived and people are cared for.

Within 24 hours of the shooting that left more than two dozen people dead and many others injured, River Oaks Church sprang into action, turning classrooms and meeting spaces into a crisis center for governmental services and disaster relief teams, from the Red Cross to the Southern Baptists of Texas Convention.

Deputy sheriffs guarded the entrance and turned away scores of media organizations to allow victim families to come and go freely.

That the two Baptist churches, about 3 miles apart, form the mainstay of this small town is not surprising. Founded in 1926, First Baptist Church and the much newer River Oaks — originally formed in 1948 and then rebuilt and revitalized in the 1990s —  nourish and sustain the town.

Extended families — such as the eight members of the Holcombe family, spanning three generations, who died in the shooting — attend one or the other church.

“Our churches are interconnected by families along with friendships,” said Paul Buford, the pastor of River Oaks Church. “Some of the people from over there will come and visit here and some of the people here will go and visit there because they want to be around friends. We work together on everything in the community. We’re the body of Christ, so that’s what we do.”

There are other churches in the area: Mt. Zion Fair Baptist, a mostly African-American church, and Cowboy Fellowship, a nondenominational church. And there’s an Islamic cemetery on the outskirts of town whose members live elsewhere. But River Oaks and First Baptist constitute the town’s core.

The Sutherland Springs Historical Museum features a display of church artifacts from the past, including an old photo of First Baptist Church. RNS photo by Yonat Shimron

The Christianity preached at both churches is standard evangelical fare, built around a personal conversion to faith in Jesus, an inerrant reading of the Bible and a commitment to converting non-Christians.

But even people who are not members — a sizable group — benefited from the congregation’s ministries. Each Thursday, First Baptist prepared a free meal for the community. It also housed a food pantry. On Sundays, it would treat members and guests alike to breakfast before the church service.

At Halloween, First Baptist would put on a Fall Festival, an alternative to a holiday some evangelicals view as celebrating the occult.

The night before Thanksgiving, the men of the church would cook turkeys. Their wives would come in the following day to prepare side dishes and dessert. After a prayer service, they would eat a noon meal together.

At Christmas, troupes of members would go caroling around town. Each Easter, the church held a sunrise service.

“The people there are completely and utterly nonjudgmental,” said Tambria Read, the chair of the town’s historical museum. “Pastor Frank Pomeroy takes in everybody, whether you have drug troubles or law troubles, domestic troubles. You are taken in with open arms.”

Even Devin Patrick Kelley, the gunman who last Sunday killed 25 members aged 1 to 77, including a pregnant woman, was welcomed into the church. Less than a week before the shooting, Kelley attended the church’s Fall Festival, said Frank Page, the president and chief executive officer of the Southern Baptist Convention Executive Committee.

Investigators say Kelley may have been motivated by rage against his estranged wife’s mother, a member of First Baptist. She was not among those killed, though her mother was.

‘The realities of this modern age’

The entrance to the cemetery at Sutherland Springs, Texas, with the flag at half-staff. RNS photo by Yonat Shimron

Churches aren’t the town’s only institutions. There’s a community building that hosts weddings and family reunions, a post office, a cemetery, and a history museum.

Once upon a time, there was much more.

In the mid-1800s, Dr. John Sutherland settled the town, establishing a clinic that took advantage of the 27 varieties of mineral waters that flow from the springs here. Soon many people were flocking to Sutherland Springs to get treatments for such ailments as rheumatism and diphtheria.

A 52-room hotel was built in the early 1900s and a sulfur-filled swimming pool. At one point there was a bank, a movie theater and a dance hall in town.

A flood and a fire wiped out most of the businesses. Later, during World War II, many left for nearby San Antonio to help with the war effort. The town dwindled in population.

There are still some cattle ranchers in town, and a Purina-owned feedlot called Texana. But many residents commute to San Antonio, about 30 miles away.

What has remained constant is the church.

Rob Hines, who teaches history at Palo Alto College in nearby San Antonio, said the importance of churches in these small Texas communities, both in the past and in the present, cannot be overstated.

“Churches and the religious life are strained by the realities of this modern age — job losses, geographic mobility, and the breakup of extended families,” Hines said. “We need each other, and a good church helps fill that need. When a small town loses its schools and churches, it’s the beginning of the end.”

Townspeople say they do not intend to let the town lose its first and central church. Southern Baptist leaders say the congregation plans to raze and rebuild the church.

“We’re not going to let this defeat us,” said Buford, the pastor of River Oaks Church. “That’s not going to happen. Evil does not win. It might give us a punch to the gut. Even in that, we know we’re more than conquerors through Christ Jesus. We’re going to make it and going to be with our Lord and Savior.”